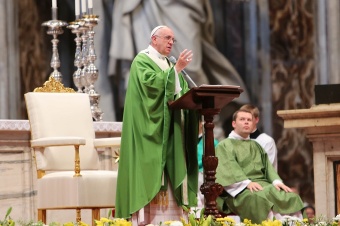 Vatican City, Feb 6, 2015 / 07:55 am (CNA/EWTN News).- In his homily on Friday Pope Francis said that he is moved whenever he thinks of the many Christians killed for their faith, and encouraged faithful to remember them and their courageous witness.

“I think of our martyrs, the martyrs of our times, men, women, children who are being persecuted, hated, driven out of their homes, tortured, massacred,” the Pope told attendees of his Feb. 6 Mass, held in the chapel of the Vatican’s Saint Martha guesthouse.

This martyrdom, he said, “is not a thing of the past: this is happening right now. Our martyrs, who are meeting their end under the authority of corrupt people who hate Jesus Christ.”

Friday also marked the feast of Japanese martyr St. Paul Miki and his 25 companions, who were killed in hatred of the faith in Nagasaki on Feb. 5, 1597.

On the feast commemorating their sacrifice, the Pope said that it would do the Church well to think about martyrs. While Paul Miki and his companions were an essential witness of their time, the pontiff urged attendees to “think of our present-day ones! Of 2015.”

Pope Francis also recalled the death of John the Baptist in the day’s first reading, who was beheaded after speaking out against Herod’s marriage to his brother’s wife.

Although John the Baptist is referred to in scripture as “the greatest man born of woman,” at the end of his life he becomes “so very small” through his imprisonment and death at the hands of a king “both fascinated and puzzled” by him.

“That perplexed king becomes capable of making a decision, not because his heart was converted, but because the wine gave him courage,” the Roman Pontiff observed.

“So John ends his life under the authority of a mediocre, drunk and corrupt king, at the whim of a dancer and the vindictive hatred of an adulteress. That's how the Great Man ends his life, the greatest man born of woman.”

The Pope confessed that “I get emotional” when reading the passage because it reminds him of all those who give their life for the faith.

Pope Francis said that John the Baptist’s final days before his death, during which he suffered doubts that Jesus was truly the one for whom he prepared the way, makes him think of the road we all take, and “where we will all end up.”

“This makes me think of myself: I too will meet my end. We all will. No one can ‘buy’ their life,” he said.

He concluded his homily by noting how each person is traveling on the road of “the existential annihilation of life” faced by both John the Baptist and Jesus on the cross, and prayed “that this annihilation is as similar as possible to that of Jesus Christ.”

Sign up below to have the hottest Catholic news delivered to your email daily!
Church Militant, we need to band together to protect our religious liberties and win the culture war!
Enter your email address: