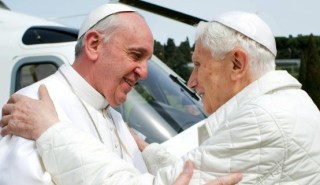 Pope Francis coming to the USA is going to be a spark. Some will try to use it to light a fire of the Holy Spirit. Others will try to use it to burn up what Pope Francis is saying. Why? Well, it seems our new Holy Father, Pope Francis, rubs a number of Catholics the wrong way. He certainly isn’t the first Pope to do so, but the difference is he troubles a much different group of Catholics than our previous Holy Father, Pope Benedict XVI did. This is interesting, because they haven’t said anything that is substantially different from one another.

Some said Benedict was a “conservative” and that he wasn’t open-minded, caring, loving, etc. These are not accurate descriptions and he doesn’t deserve to be accused of such things. Rather, he (like Francis) is CATHOLIC. That means he doesn’t fit into the neat political framework of being either liberal, conservative, progressive, traditionalist, moderate, etc (read this for more on why those labels don’t apply).

Take these quotes from BXVI for example – most would call them “liberal” quotes:

**”It is deplorable that homosexual persons have been and are the object of violent malice in speech or in action. Such treatment deserves condemnation from the church’s pastors wherever it occurs.”

**“It is theologically and anthropologically important for woman to be at the center of Christianity. Through Mary, and the other holy women, the feminine element stands at the heart of the Christian religion.”

**”If we refuse to share what we have with the hungry and the poor, we make of our possessions a false god. How many voices in our materialist society tell us that happiness is to be found by acquiring as many possessions and luxuries as we can! But this is to make possessions into a false god.”

**The fact that some states, power groups, and energy companies hoard non-renewable energy resources represents a grave obstacle to development in poor countries. The international community has an urgent duty to find institutional means of regulating the exploitation of non-renewable resources, involving poor countries in the process, in order to plan together for the future.”

So, just as Benedict shouldn’t be reduced to political labels, neither should Francis. It isn’t fair to either of them.

I think there could be several reasons some have worries about Francis – here are 7 I have identified.

Our communities, our Church, and our world needed a Pope like Francis. Someone to shake us up out of our comfort zones. As Catholics, we have to be careful about criticizing our Holy Father, as if he is just another one of the many Catholics in the world. He is the Vicar of Christ on earth and the guardian of right doctrine and practice. We are not. Is he above criticism? No. Is he perfect? No.

Yet, when we start to rely more on our own opinions vs the teachings of Jesus’ Church, we put ourselves in a danger zone. I challenge you to see Francis as an earthly spiritual father. Sometimes he is going to ask us to grow in ways we don’t want to. But, it may be good for us anyway.

Lastly, pray for him. He needs your prayers.

NOTE – Comments are welcome, but discussion MUST remain charitable at all times. Comments are strictly monitored.