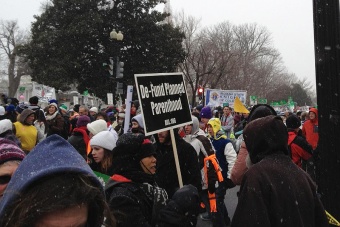 Washington D.C., Aug 7, 2015 / 03:41 pm (CNA/EWTN News).- Alabama on Thursday became the third U.S. state this week to withdraw funding from its local branches of Planned Parenthood, after the U.S. Senate failed to bring to the floor a bill that would have blocked federal funding of the abortion group.

The decision comes in the wake of a series of undercover videos showing officials from the organization describing the harvesting of body parts from aborted babies at their clinics.

Bentley tweeted that “As a doctor and Alabama's Governor, the issue of human life, from conception to birth and beyond, is extremely important to me” and “I respect human life, and I do not want Alabama to be associated with an organization that does not.”

Casey Mattox, a senior counsel with Alliance Defending Freedom, commended Bentley's decision: “Not one more penny should go to Planned Parenthood, a billion-dollar abortion dealer caught on camera negotiating the sale of hearts, lungs, and livers from aborted babies. Governor Bentley should therefore be commended for ending the use of state taxpayer dollars for such barbarism.”

“Our tax dollars instead should fund local public health clinics, which outnumber Planned Parenthood locations more than 10 to 1 and are not tainted by constant scandals and misdeeds. America doesn’t need Planned Parenthood,” Mattox concluded.

On Aug. 5, New Hampshire's Executive Council (the state's executive body alongside its governor) voted 3-2 to deny the state's contract with Planned Parenthood of Northern New England. The decision will remove $639,000 in state funding of the organization.

Executive Councilor Chris Sununu, a Republican, voted to deny Planned Parenthood's contract, even though he supports legal abortion. According to the Washington Times, Sununu said that “When you have a group like this here at the national level under all this investigation and scrutiny – look, if it were any other contractor, there wouldn’t even be a debate. Of course we wouldn’t be doing business with them.”

“But for some reason the Democrats seem to be going out of their way to find an excuse to keep Planned Parenthood around, and on the line and on contract. There are lots of other providers of these services out there. All I’m saying is, let’s go contract with them and use these other health care providers to make sure we are giving adequate choice to these women.”

Louisiana's health department ended its Medicaid provider contract with Planned Parenthood Aug. 3, though it will take effect in 30 days. The decision was made, according to Governor Bobby Jindal, because “Planned Parenthood does not represent the values of the people of Louisiana and shows a fundamental disrespect for human life. It has become clear that this is not an organization that is worthy of receiving public assistance from the state.”

The recent rise in controversy around Planned Parenthood is related to a series of videos released by the Center for Medial Progress. The videos show Planned Parenthood officials casually discussing prices for various body parts, and how abortion procedures may be altered to ensure intact organs.

The bishops of Colorado, as well as Archbishop Paul Coakley of Oklahoma City, have called for penance and prayer in response to the content of the videos. The bishops of Colorado have designated Aug. 28 as a day of penance and prayer, and Archbishop Coakley called on the faithful “to engage in the political process as advocates for the dignity of human life” and added, “I urge a prayerful response. Our hearts must be converted before our society will be able to consistently enact and embrace just laws that embody a proper regard for the sanctity of life.”