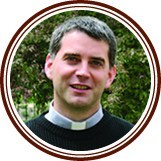 Fr. Florian Racine was a graduate student here at Texas A&M when I was an undergrad. Even while he was a student, he had a passion for the Eucharist. After a few years of working as an engineer in Houston, he moved back to France and was ordained as a priest for the Diocese of Frejus-Toulon.

After his ordination, his passion for the Eucharist has been put into practice, as the founder of a community named The Missionaries of the Most Holy Eucharist (a clerical association erected by Bishop Dominique Rey in 2007). Their goals are to:

Fr. Florian is still a diocesan priest, as well as serving as moderator of the Missionaries of the Most Holy Eucharist. He serves as rector of the Basilica of St. Mary Magdalene church in Saint-Maximin, France.

Last year Ignatius Press published Fr. Florian’s book, Could You Not Watch with Me One Hour?: How to Cultivate a Deeper Relationship with the Lord through Eucharistic Adoration.

His Missionaries now have an official U.S. home in Yonkers, N.Y., as reported by Elizabeth Scalia here (a great story too). You can find out more about the retreats they now offer here.