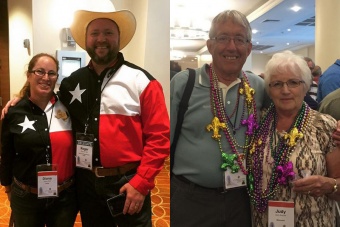 Philadelphia, Pa., Aug 4, 2015 / 03:05 pm (CNA).- The Knights of Columbus kicked off their 133rd annual supreme convention with the usual state-themed flair on Monday in Philadelphia.

For years now, the Knights have spent the better part of the first day of their annual convention meandering among various state-themed parties hosted in hotel rooms. Each state hosts a party that serves as a meet-and-greet with other Knights, complete with signature food, drinks and décor from their home.

The line to even get in the door to the party for Louisiana on the 8th floor of the hotel was about 75 people deep Monday evening. Cajun music and loud chatter wafted into the hallways of waiting people.

Once inside, the room boasted wall-to-wall green, purple and gold décor as well as mountains of King Cake and a table full of ready-made “Hurricanes,” a famous drink from New Orleans. Several representatives from Louisiana sported masquerade masks or Louisiana-themed face paint, and an entire couch was draped with Mardi-Gras beads to hand to the scores of people walking through the doors.

Charlotte Rose from Shrieveport, Louisiana sat underneath a banner that read “Swamp Knights” as she shook hands and greeted the people filing past.

“The best part has just been meeting everybody from everywhere,” she said. “Everybody’s been so nice.”

When asked why her state’s party was so popular, Donna Martin mused: “Because we give out the most stuff.”

The atmosphere on the sixth floor in Maryland’s room was a bit more organized but nonetheless jovial. The red, black and yellow Maryland flags covered the walls in the room, and a string of bright red crab lights hung on the wall next to the bar. On the menu: crab dip on crackers and Orange Crush drinks.

Meanwhile on the fifth floor, the pin-swap festivities were well underway. Knights’ representatives arrive to the convention armed with 50 or more pins from their home state, in hopes of trading them away for pins from other states. It’s a way to meet other delegates and to “collect them all,” Roland Ransom from Wisconsin said.

“It’s like a quest,” he said. He and his wife Judy said they especially hoped to swap pins with people from some of the “rare” states or provinces – like Hawaii, Alaska or some of the Mexican states – that don’t have as many delegates at the convention.

Chris Gonzalez from Connecticut said the pin swap is a good way to network with other Knights and to swap fundraising tips or other collaborative ideas.

Also, “it’s just fun. I’m a geography teacher, so I have a great time with this,” Gonzalez said.

Phil and Theresa Lucero, from the Archdiocese of Santa Fe in New Mexico, said the pin-swap tradition has been around for as long as they can remember.     The Luceros came armed with 200 New Mexico pins, and said they planned on giving away whatever they had left over at their parish back home.

“We go to daily Mass, and we have a lot of parishioners, so we give one to all the ladies, the ones we have leftover. They love it,” Phil said.

There were 76 different pins to collect that night – one from each of the 50 United States, as well as 26 others from states or provinces in Poland, Guam, the Philippines, New Mexico, South Korea and Canada, which all have Knights of Columbus groups.