Friday of week 32 in Ordinary Time

By STEVEN D. GREYDANUS | In theaters this weekend, The 33, starring Antonio Banderas and Juliette Binoche, recounts the extraordinary story of the 2010 Chilean mining disaster that buried 33 miners 2300 feet underground for 69 days before their… 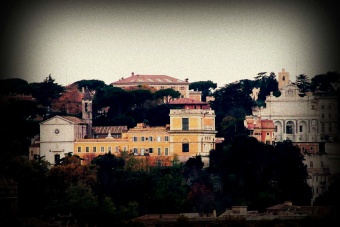 Rome, Italy, Nov 12, 2015 / 03:18 pm (CNA).- Spanish liberation theologian Fr. Jon Sobrino, whose works were censured by the Vatican nearly a decade ago, is slated to take part in an event this Saturday at Rome’s Urbaniana University.

The gathering is aimed at republishing the “Catacombs Pact,” a document signed after the Second Vatican Council by various future members of the Marxist school of thought. It was condemned in 1984 by the Congregation for the Doctrine of the Faith, headed at that time by Cardinal Joseph Ratzinger.

Fr. Sobrino, a Jesuit priest born in Spain in 1938, had his works censured by the congregation in 2007. After six years of analysis of his works – “Jesus the Liberator, A Historical-Theological Reading of Jesus of Nazareth” and “Christ the Liberator – A View from the Victims” – the Vatican held them to be contrary to Catholic doctrine.

The Holy See warned at the time that in both works “various erroneous or dangerous propositions that can cause harm to the faithful” had been found.

Fr. Sobrino wrote that in the New Testament, the divinity of Jesus is only present in “seed form.” He also suggested that there are two subjects in Christ.

“The result,” Valentino warned at the time, “is it’s not clear that the Son is Jesus and Jesus is the Son.”

While the Vatican’s 2007 statement recognized that Fr. Sobrino demonstrates in his works a concern for the poor, something shared “certainly by the entire Church” – it also said that “this option is not exclusive” and therefore “the Church cannot express herself through reductive sociological or ideological categories, that would make out of this preference a partisan option leading to conflict.”

Additionally, the statement recalled that after an initial examination of his works in 2001, the dicastery sent Fr. Sobrino “a list of erroneous or dangerous propositions found in the abovementioned books.”  The next year Fr. Sobrino sent a response that was not satisfactory because doctrinal “errors still remain.”

Fr. Sobrino was invited to participate at the Urbaniana University in commemoration of the 50th anniversary of the Catacombs Pact, a document which he reportedly would like to see re-proposed this weekend and promoted via conferences, a meeting with the press and a Mass in the Catacombs.

Some local sources voiced concern to CNA that the event this weekend is an attempt to “revive” the ideas of Jon Sobrino, which the Vatican has not lifted its censure of.

In its 2007 statement, the congregation noted that the “does not intend to judge the subjective intentions of the author, but rather has the duty to call to attention to certain propositions which are not in conformity with the doctrine of the Church.”

By Simcha Fisher | Caitlyn Jenner, the transgendered celebrity recently named Woman of the Year by Glamour Magazine, told Buzzfeed that “the hardest part about being a woman is figuring out what to wear.”

I’ve been female since I was conceived.  I… 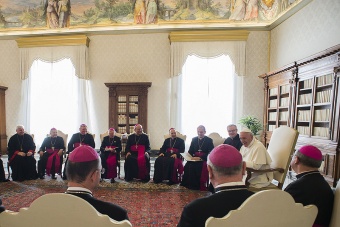 Vatican City, Nov 12, 2015 / 03:12 pm (CNA/EWTN News).- Speaking to the Slovak bishops on Thursday, Pope Francis reminded them that the Church is called to welcome immigrants and to reach out to ‘the other’, including by ministering particuarly to the Romani people.

With globalization, he said Nov. 12, “at times we perceive threats to less populous nations, but at the same time elements that can offer new opportunities. One opportunity, which has become a sign of the times, is the phenomenon of migration, which demands to be understood and confronted with sensitivity and a sense of justice.”

“The Church is required to proclaim and bear witness to the welcome of the migrant in a spirit of charity and respect for the dignity of the human person, in the context of the necessary observance of the law.”

Pope Francis spoke to the Slovak bishops, who are in Rome for their five-yearly ad limina visit, at the Vatican. His words on showing welcome to migrants comes as more than 750,00 migrants, many of them from war-torn Syria, have entered Europe this year. The influx of migrants has led to differing policies, and often a lack of welcome, in many European nations.

“Faced with the prospect of an increasingly extensive multicultural environment, it is necessary to assume attitudes of mutual respect to promote encounter,” the Pope reflected. “It is to be hoped that the Slovak people will maintain their cultural identity and heritage of ethical and spiritual values, strongly linked to the Catholic tradition.”

By doing this, the Slovaks, more than 60 percent of whom are Catholic, “will be able to open up without fear to exchange on the broadest continental and global horizon, contributing to a sincere and fruitful dialogue, also on themes of vital importance such as the dignity of human life and the essential function of the family.”

“Today, more than ever, it is necessary to enlighten the path of peoples with Christian principles, seizing the opportunities that the current situation offers to develop an evangelisation that, using a new language, makes Christ’s message easier to understand,” Pope Francis said.

“For this reason it important for the Church to give hope, so that all the present changes may be transformed into a renewed encounter with Christ, that guides the people towards authentic progress.”

He recalled the importance of the lay people in evangelization, saying they are called to animate the world with the leaven of the Gospel, and so “they cannot refrain from opearing within the political process aimed at the common good.”

“To be joyful witnesses to the Gospel in all environments, they need to feel themselves as a living part of the Church. It is your task,” he told the bishops, “to recognize their own role in the live of the ecclesial community, including with respect to the development and realization of pastoral projects.”

Turning to speak of the family in more detail, the Pope said it “faces many difficulties, and is subject to many dangers.”

Slovakia has one of the lowest birthrates in Europe – a fertility rate of 1.33 children per woman, well below the replacement level.

Pope Francis said the Church’s efforts for families need to include “adequate accompaniment for all families, including those where members are not present, especially if there are children. As part of the pastoral care of the family, it is necessary to appreciate young people, the hope of the Church and society.”

Noting young persons’ “strong desire to serve others and to work for solidarity,” he said this must be guided by pastors “for it to become a living encounter with Christ, in a committed project to spread the Gospel.” Youth “need to have from you a clear instructions about doctrine and morals, to build in the city of man, the city of God,” he added.

The Pope encouraged the Slovak bishops to provide continuing formation for their priests, as they are, “for the majority of the People of God … the principal channel through which the Gospel passes, and also offer the most immediate image through which the mystery of the Church is encountered.”

He said the Church, a “sign and tool of the unity of men with God and with each other, is called upon to be the house and school of communion, in which one learns to appreciate and welcome positive qualities in others.”

Thi s attitude, he exhorted, “is very useful also in reference to the good connections which it is necessary to restore in Slovakia between pastors and consecrated persons, better appreciating the valuable contribution of all religious in pastoral care.”

He also reflected on pastoral ministry to the Romani people (also known as Gypsies), who are often marginalized in Slovak society.

“At the same time, the Church in your country must carry forth the pastoral care of the Roma, through extensive evangelisation that seeks to reach all these people who, unfortunately, continue to live in some ways separated from the rest of society.”

Pope Francis concluded his address by conveying his affection to all Catholics of Slovakia, saying: “I entrust your pastoral concerns to Our Lady of Sorrows, Patroness of Slovakia, and I invoke her maternal intercession that the nation may prosper in peace and in conformity to the best values of its Christian tradition.”

By WAYNE LAUGESEN | DENVER — As a Catholic growing up in the heavily Hispanic town of Commerce City, Colo., Floyd Trujillo was immersed in the social and religious teachings of the Church. Though still a devout Catholic at age 59, Trujillo finds…

By Benjamin Harnwell | A New York Times Magazine poll recently asked readers if, given the possibility, they would go back in time and kill Baby Hitler.

Ben Carson, a Seventh Day Adventist, was duly asked by journalists, and responded with a firm…

Pope Francis today proposed three verbs as an exhortation to the spiritual family of St. Luigi Guanella: to trust, to look, and to make haste.

This morning in Paul VI Hall the Pope greeted some 500 members of the Family of St. Luigi Guanella, known simply as Don Guanella (1842-1915). He was the Italian priest wh…